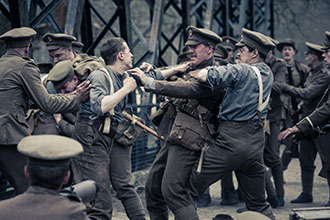 Our World War is a new drama series for BBC Three, starting 7 August.  It is based on real stories of British soldiers during the First World War.  ONSIGHT is proud to have been involved by providing the camera facilities on this unique project, as part of the BBC's programming to commemorate the war's centenary.

Produced by BBC Productions, each episode reveals the conflicts faced by the soldiers, often from their perspectives. To achieve this, different camera methods were used, including POV shooting, to bring audiences closer to the action than ever before. ONSIGHT supplied varied camera packages, encompassing an ARRI Alexa, the Black Magic Pocket Cinema model and GoPros for DoP Stuart Bentley.  The team also provided extensive kit testing prior to filming to ensure the look and feel could be captured.

There will also be an "interactive" episode online, inspired by episode 2.  ONSIGHT collaborated with Phil Wood on this piece, which allows users to take part in the soldiers' experiences and decision-making.

More info to come about the project and ONSIGHT's services.

Our World War, episode 1, The First Day can be seen at 9PM on BBC Three.  Watch the trailer and see what the papers are saying below.

'..fast-paced camerawork and a hard edge...a strong sense of reality.'

'Our War was the most powerful documentary series that BBC Three ever broadcast. It helped to change the way that war could be shown on television....And that's where Our World War comes in... It does much to blow away the fog of the past and present an immediate, visceral view of the fighting in all its chaos and desperation...the stand-out programme...harrowing and immersive'.

- The Times: Pick of the Day