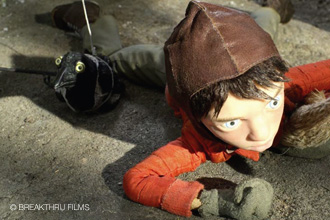 Wolf at the door

Bringing the classic 1930s children’s tale Peter and the Wolf – intended by Russian composer Sergei Prokofiev to introduce youngsters to the delights of orchestral music – to a new generation is easier said than done.

With children’s expectations conditioned by HD video games and 3G movies, the bar has been raised in terms of production values.

Producer Hugh Welchman and his Breakthru Films team realised that to capture a child’s imagination today, the stop-frame animation would need to exude production values that its audience would not be able to resist.

The 13-month project was made at the Se-Ma-For Studios in Poland, where 100 British and Polish animators turned Bafta-winning director Suzie Templeton’s vision into a reality.

Templeton decided to abandon the traditional narration and let the film’s puppets do the talking. Most of the action took place in a 60ft-long forest constructed by production designer Marek Skrobecki, who used 1,700 real baby trees, each sewn into a snow-capped landscape built with polystyrene and wood.

As producer Alan Dewhurst recalls, high definition stills cameras shooting digital files were preferred to 35mm – the traditional stopframe animation format. “They were 2,500 lines and 3,500 lines respectively – and were a lot cheaper and more flexible than film,” he says.

“There are also on-set advantages,” continues Dewhurst. “Because the cameras are so small and light you can rig them more easily and get them into corners that you never could with a 35mm camera. Plus they produce a much happier pipeline because you can generate Jpeg images immediately from the digital files, eliminating the need to wait for rushes.”

Starting with a new orchestral soundtrack, the main headache was retiming the action to fit seamlessly with the music – while keeping track of the sequence of frames. “Our most edited shot was 125 frames long and had 100 edits – very difficult to keep track of, particularly when you don’t have a timecode,” he admits.

The offline edit was maintained in Adobe Premiere, with Dewhurst describing the process of transferring the video into Final Cut Pro (FCP) – which is designed to operate with a timecode – as “extremely painful”. “There was no smooth way of getting the EDL from Premier into FCP. Next time we’ll put more resources into the editing side,” he promises.

With the final high resolution Quicktime file turned into an HDCAM SR master, it was on to On Sight to manage the production in its distribution formats, which included a 35mm version, SD, HD and DVD.

“On Sight was very well organised, which is just as well because it’s easy to lose track of all the versions made,” declares Dewhurst. The HDCAM SR master certainly stood up to projection on a huge screen at the world premiere at the Royal Albert Hall. “It looked fantastic,” adds Dewhurst.