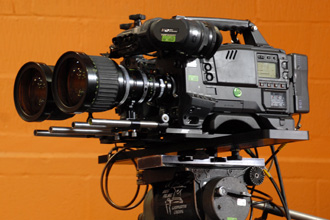 Why 3D is about to break through

For a long time 3D movies and TV shows have been a bit of a gimmick. They have been used to re-energise a tired franchise, help a film stand out at a crowded box office or to give TV viewers a glimpse of what the future might hold.

But many in the 3D production industry now say that future may be closer than ever before. Film makers, technology companies and post-production outfits recently gathered at the historic Shepperton Studios to assess just how far 3D has come and where it goes next.

The 3D technology gathering favour is based around stereoscopic projection. As its name implies this involves projecting two images.  The viewer wears spectacles that ensure one image goes to each eye and lets the brain piece the two together to give the sense of solidity.

Catch and release
"3D has always been seen as complicated because you had technical issues during acquisition, post-production and distribution," said Mark Horton from Quantel - a maker of digital editing equipment.

More high profile movies, such as Beowulf, are being produced in 3D
In the past, said Mr Horton, one of the biggest problems was that there was no way to know if the images being shot on two cameras in preparation for 3D projection would match until the film was developed.

"You could not see stereo effects when you were shooting," he said. "Now you can see what you are doing while you are doing it and that's a big step forward."

Phil Streather, a film maker who created the 3D Imax movie Bugs!, said: "It was hard to make it good but it is getting easier." "Where the tools are getting really sophisticated now is in the level of control between the two cameras," he said.

Stereoscopic 3D works using two lenses set the same distance apart as human eyes - about 6.3cm. "You've got interaction controls or intra-ocular controls and convergence controls dynamically in the same shot," he said. "That's what you need to do for sports or concert work or any of that live action stuff."

Axis Films, which hosted the day at Shepperton, said it was now possible to shoot stereoscopic 3D footage with everything from minicams up to high end movie cameras.

Paul Carter, head of cameras at Axis Films, said digital production systems had made it much cheaper to shoot in 3D. Before now, he said, filming a movie in 3D involved hiring specialist staff and equipment which could add thousands of dollars per day to a shoot.

"With digital there's only a 20-30% cost difference on the whole process and that's making a lot of people shooting 2D consider giving it a go," he said. "3D is starting to get rid of the image that it's a dark art," he said.

Care must be taken to ensure that the sequence of images matches and that one is not a different colour, lags a frame behind or has an artefact, such as dirt or lens flare, that the other lacks.

"If you leave errors in your brain will try to correct them and that's not going to be a very comfortable programme or film to watch," said Mr Horton from Quantel.

Digital projectors do a much better job of handling the high frame rates (144 frames per second) demanded by 3D that can preserve the details of a scene.

"Previous eras of 3D were associated with bad colour and headaches," she said.

However, she added, older cinemas keen to convert may have to install a silvered screen that does a better job of reflecting the polarised light used to separate images.

This growth reflected a growing interest in 3D by movie studios, said Ms Jones. More and more high profile films, such as Beowulf, were being produced in 3D. Disney has a strong interest in 3D and DreamWorks has committed to producing all its movies in 3D from 2009. "It's helping to give people a reason to go back to the cinema," she said.

However, she added, many movie studios made the bulk of their profits from the sale of ancillary material such as DVDs - something that could be hit by the growing interest in 3D given the small number of TVs in homes capable of showing these images.

But this too is changing. Already, said Mr Horton, stereoscopic TVs are available from Samsung, Mitsubishi and Philips. There have also been stereoscopic broadcasts in Japan with more due to follow in China and Korea. An entire stereoscopic channel is being produced for footage shot at the Olympic games in Beijing.

It looks like the future of 3D is firming up.