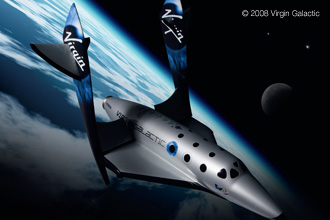 Getting away from it all has taken on a new meaning. Or it will in a couple of years, when Richard Branson plans to take his airlines business to the next level – offering the world’s first commercial space flights aboard his Virgin Galactic spaceline.

Future astronauts can find out more by watching a promotion film about the venture, which delves into the technology and the people behind Virgin Galactic, directed by film-maker Carl Fospero of Made in the Shade Productions.

Shot on Sony HDCAM at 50 and 60i, Fospero was granted three days' exclusive access to designer Burt Rutan and his team of specialists at the Mojave Spaceport in California, where the spaceship, which will fly eight people into sub-orbital space, is under construction.

“We realise we are documenting a historical event and that it would be in all our interests for it to be made at the highest resolution possible,” says Fospero, who worked with a small crew including a cameraman and soundman.

With a finished electronic press kit including the film needed in just a week, graphics sequences – which included an artist’s impression of the flight – were imported into Final Cut Pro as Quicktime movies to be edited with Fospero’s footage.

Fospero’s first stop with his rushes was On Sight's HD LAB, where he scrolled through 19 hours of tape and pulled off 45 minutes worth of material. Archive footage, promotional material and vox pops also needed to be added into the Final Cut, with On Sight using both its Alchemist Platinum Ph-C and the Alchemist Ph-C HD standards conversion kit to up-convert material to HDCAM 1080 at 50i, before digitising to a portable hard drive for editing. The finished version was then taken back to On Sight and outputted to PAL and NTSC versions.

Says Fospero: “What I like about On Sight is that it’s a really nice, solid company that’s strong on technical expertise. You always really get the feeling that its staff are ready to help and that’s what I appreciate more than the music and the vanilla lattes of the flashier Soho companies.”

“It has a real ‘can do’ attitude no matter what problems you come up with. If it doesn’t have an immediate answer, they say ‘OK, don’t’ worry. We’ll figure it out'.”