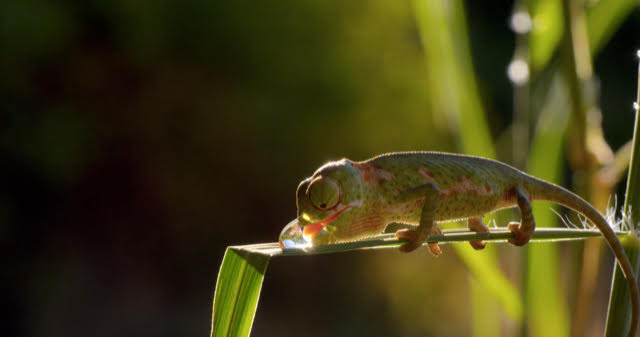 The Elephant and The Termite

‘The Elephant and the Termite’ tells the remarkable story of the relationship between Africa’s largest and smallest and the unique wildlife community they support. Peabody Award-winning filmmakers Mark Deeble and Vicky Stone (‘The Queen of Trees’) and their small, dedicated team spent two years of their lives camped out at a waterhole in Kenya to record life at Africa’s great wildlife meeting place.

In arid regions across southern Kenya, the waterhole, created by elephants and termites, is central to life. It is where animals visit to drink and where some creatures are born and die. Every visit is charged with tension; a waterhole is the perfect place for predators to wait in ambush. That is the traditional view, but there is an entire community of creatures that call the waterhole home, many of whom live at an elephant’s toenail height such as frogs, dung beetles and chameleons.

OnSight were fascinated to learn through our post production work about the impact this complex relationship has on the environment of Africa’s wildlife. It was a pleasure to provide post production for this enchanting and visually stunning project, with Andy Lee as Senior Colourist, Adam Sample as Senior Online Editor and Jeff Halsey as Post Producer.

“We had a real advantage with this project as we had worked with the team involved before on The Elephant Queen. This meant we already knew what to expect in terms of their requirements and any challenges we might face, and were set up nicely to circumvent these before they cropped up. This led to a much smoother post process. It was fantastic to work with Mark Deeble and Vicky Stone again, their united creative force is so impressive and it’s a pleasure to work with clients with such high standards.” - Jeff Halsey, Post Producer.

Speaking about where the idea for the film came from, the filmmakers said, “It started with an observation that prompted a question - flying back from our Tsavo camp one evening, we’d remarked about how, from the air, when we’d find a waterhole, it was often set amongst the ochre scars of termite mounds. Was there an association?”

It wasn’t until they discovered a paper by PhD student Julius Ayeni printed 45 years ago in the Journal of Applied Ecology that the key to unlocking this mystery was found. The paper investigated the natural evolution of waterholes in Tsavo and linked them to termitaria. It led the pair to others working in the same field - Weir who had observed the same phenomena in Hwange National Park in the late 50s, Jarman in the 70’s in Zambia, Ruggiero and Fay who investigated it in CAR in the 90s. The search for research went global, with all providing leads that eventually confirmed the causal association between termites and elephants and waterholes.

It finally answered the question that they had asked years before when flying over Tsavo when they looked down to see sunlight glinting off a waterhole, surrounded by a field of termite mounds.

‘The Elephant and the Termite’ was broadcast on WNET’s show ‘NATURE’, which airs across the US. It was also broadcast on Japan’s public broadcaster NHK, and is available on demand. It will be distributed by Terra Mater Factual.