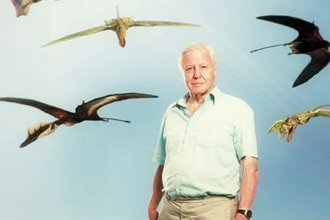 The monster challenge of filming in 3D

Producing a CGI doc about extinct creatures that would be fit for both the TV screen and Imax took a lot of work and planning, says Anthony Geffen, Producer and CEO of Atlantic Productions.

When Sir David Attenborough and I sat down at the end of a day’s shooting in the Canadian Rockies, we had no idea what it would lead to. David has a fascination with pterosaurs and we began talking about bringing them back to life using CGI, based on the latest research. Then we came up with the idea of telling the story in 3D. A bottle of wine later, we were imagining these giant creatures flying around the Red Pig Tavern.

All of David’s programmes had been on the BBC but it had no plans to broadcast 3D. Fortunately, the senior management at Sky were preparing to launch a 3D channel, loved the ambition of the project and could see how it would showcase the strengths of 3D. However, they wanted it for Christmas, which was less than a year away. It was also planned that the film would be released in giant-screen cinemas, including Imax. We knew that audience expectations had been raised by Avatar, so there could be no shortcuts.

Pterosaurs took to the air around 220 million years ago and died out around 65 million years ago. All of the pterosaur fossils that have been found would probably fit in the back of a small van and most only exist as pancake-flat crushed bones. But scientists have been able to deduce amazing insights into pterosaurs, including from some recent finds in China.

David had a clear idea of the story he wanted to tell, but to shoot at a resolution suitable for both 3D television and Imax was a challenge. Collaboration is the key for 3D, and we worked with On Sight and Vision 3 to plan the shoot and workflow.

The camera unit weighs 56kg, consisting of two cameras, a 3D rig, lots of wires and a very large tripod. It requires a team of at least 12 people, with up to four people just to move it.

The cameras use a prime fixed-length lens, so there’s no zoom. Each time the team wanted to change the shot, they first had to change the lens. The two cameras must be realigned precisely for each shot to achieve the 3D effect, and that process alone can take more than half an hour. So the script was broken down into a shot-by-shot storyboard, specifying every shot size and angle.

A significant part of the film would be CGI. Special effects company Zoo drew on a team with experience on features such as Harry Potter and The Chronicles Of Narnia, and worked with the specialist skills of CVFX, Fido and Molinare. The location footage and CGI would need to be carefully integrated, in particular for one of the final sequences where David glides with a 50ft wingspan pterosaur.

Producing CGI for 3D Imax meant massively increasing detail as the film would be blown up for a screen eight times the size of a London bus and every detail of the pterosaurs would be seen. The team worked for months with a team of scientists to build accurate creatures based on original fossils.

During the first shoot in Germany, we realised how slow things could be on a 3D shoot so we implemented military-style procedures to keep things moving. We were surprised how well the rig coped with extreme close-ups.

When we started to film live animals, including a tiny flying Draco lizard at the Eden Project in Cornwall, we faced new problems getting the equipment to keep up. With 90% humidity, ice packs criss-crossed the Eden Project as we attempted to cool down the camera rig. Then we discovered that the vast feature film crane couldn’t carry the weight of the 3D rig but, as ever, the team were quick to improvise a solution. We were relieved when, later on, we managed to get the camera rig mounted on a helicopter to do the dramatic scene of David in a glider flying with a giant pterosaur. Even then, there were problems as we could only shoot for 10 minutes at a time because of the limited storage on the memory cards.

David’s journey is now complete and the whole world of giant pterosaurs in 3D is about to burst into people’s living rooms and across Imax screens. It’s been an extra ordinary experience for all of us working with a new technology. The equipment is continually improving and will become more flexible, and I think 3D will present great opportunities for film-makers for years to come.

Anthony Geffen's tricks of the trade

• Understand the medium - get a feel for what it can add to the storytelling and visuals, and what’s practical on location and in post

• Plan, plan and plan some more. It’s more than ever the case in 3D that time spent scripting, storyboarding and prepping shots pays off

• Partnership - work with the best people. There is so much to learn, you need the best team and 3D support. As a production company, you can’t be a one-stop shop