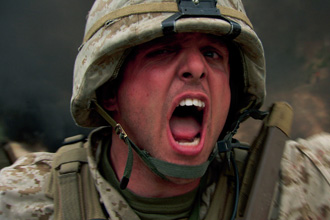 The heat of the battle

How film-maker Nick Broomfield’s latest film used HD to detail the reality of the War in Iraq.

Film-maker Nick Broomfield is no stranger to documenting tragedy. In 2006, he dramatised the real life story of the 23 Chinese cocklepickers who drowned at the hands of Chinese gangmasters in Morecambe Bay in 2004.

His latest film, released last month, details the true story of the killing of 24 Iraqi civilians at the hands of US troops in a revenge attack following the death of one of their own soldiers.

Both films were shot in HD using Sony HDW-750P cameras and small crews, an approach which Broomfield insists amounts to nothing short of a revolution in drama storytelling.

“I believe that the camera always dictates the spirit of the fi lm,” declares Broomfield, who argues that The Battle for Haditha’s use of HD cameras allowed him to get the best out of his largely amateur cast without intimidating them with the scale of a full-blown drama shoot.

Using film as a shooting format would have meant a much bigger production entourage including a clapper loader and a focus puller, he insists. “The challenge of working with non-actors is getting the best possible results out of them, which is all about making them feel comfortable. What we did would have been close to impossible shooting on 35mm because the fact that the camera runs out of film more quickly puts a terrible pressure on the actors and crew.”

The HDCAM tape allowed them the benefit of longer takes, which suited the film’s less structured shoots and use of non-professional actors. One pivotal scene was the re-enactment of the grief of the Iraqi women from Haditha following the killing of their husbands and sons by the US marines. “I knew it was going to be hard-going and I had to get amazing performances out of them,” explains Broomfield.

“One woman who had herself lost a son – he was shot on her doorstep in front of her husband – offered to lead the grieving. Within 20 minutes, every single woman was in tears, beating their faces.”

Broomfield shot the scene in a single, 40-minute take. It would have been impossible to do anything else, he reasons. “How could you recreate those same emotions a second time around?”

Broomfield explains that the trick with amateur actors is to get them to be themselves. “What you can’t do with non-actors is to have them act. You have to get them to be who they are... they had all been through similar experiences, losing family members and living through that daily terror of not knowing if the insurgents or the US soldiers would kill them.”

For Broomfield, another strength of the high-resolution format is that it has the quality to stand up to 35mm transfer for the big screen at a fraction of the cost of film. Plus the transfer from a 1080 format to 35mm produces better results than 16mm up-conversions.

“I think the definition is better,” adds Broomfield, who has come to prefer the look of HD. “It’s much closer to how the human eye sees reality, which is something that I’m really attracted to.”

Using the Sony HDW-750P as the main camera shooting 25P, Broomfield also had a lightweight Sony HVR-Z1E for getting more intimate shots in situations where there was little room for manoeuvre. Internal footage of marines in one of the Humvee jeeps, for example, plus shots of battle scenes where there was a lot of movement. “The 50i footage from the Z1E is slightly softer so you can see the difference, but it’s not that obvious,” says Broomfield.

Footage was edited in Final Cut Pro in a purpose-built networked edit facility in Jordan, capable of handling a project twice the size of Broomfield’s previous film Ghosts.

Set up in consultation with On Sight, the system allowed two video editors and a sound editor to work on footage simultaneously. “This was very handy,” admits Broomfield “We didn’t really have a full-time continuity person, so if a continuity issue arose, we’d just call up the edit and ask what somebody was wearing at such and such a time. It was pretty wonderful luxury to have.”

A simultaneous translation was done using an Iraqi translator and the film was off-lined with subtitles as the shoot progressed. The masters were transported on hard drives back to London where On Sight conformed the masters and ran the Z1E’s footage, acquired at 50i, through a Snell & Wilcox UKON converter to de-interlace and noise reduce the footage before conversion to 25P and being sent out for grading.

On its return, On Sight added text and subtitles and on-lined for playout to an HDCAM SR master for theatrical distribution. In total, On Sight provided 18 separate deliverables including three different aspect ratios, each version of which was also produced with and without subtitles, as well as in both PAL and NTSC downconverts, plus an HDCAM SR version for Channel 4 in 5.1 and stereo audio.

Overall, Broomfield feels he has achieved what he set to do: to make an even-handed film designed to shed light on a specific wartime atrocity and, at the same time, make a wider statement about the conflict.

The result is a film that isn’t so much anti-American as anti-war. If anything, his research from firsthand sources into the Haditha killings revealed that the US Marines were just as much victims as the Iraqis caught up in the tragedy. “They had lost buddies and seen a lot of gruesome combat fighting. I felt for them.

“I made the film because we have been at war in Iraq for over four years and we really knew nothing about the Iraqis and the insurgency. Everything has been reported from the US point of view and most journalists haven’t been out of the green zone. I wanted to know who these insurgents were – patriots or crazy fundamentalists, and what it’s like being an ordinary Iraqi raising a family amid the conflict."