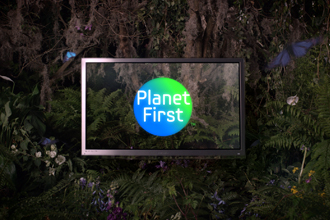 cineo82 3D projectors from projectiondesign® have just been used by ONSIGHT in the final grading of the National Geographic Channel (NGC) and Samsung 3D commercial for Anglo Filming.

This was achieved inside the world-class 3D SGO Mistika Suite at ONSIGHT in Soho, London. Another set of cineo82 3D projectors are also to be found at ONSIGHT's new 3D Centre located at Shepperton Studios, UK.

The projectors, distributed through RGB communications, were supplied, installed and aligned in early 2010 by post production specialists, Kaurus® who also provided the projection screens and custom filter systems for the multi-standard 3D grading suite.

The commercial was created in support of Samsung’s ‘Planet First’ initiative for greener products and sustainable solutions. The spot depicts examples of innovative products like the Sams ung solar powered mobile phone. The 3D captures the natural beauty of the location as well as Samsung’s latest product designs.

During post production, all client attended 3D on-line work and mastering was carried out in the HD Lab’s 3D Mistika projection suite. "Apart from the normal complexities of 3D, which the 3D Mistika Suite dealt with easily, it was also necessary to view the commercial as it was being made on a number of different displays including their grading-quality projection source, a calibrated TV monitor and the actual Samsung product," says David Cox, colorist and operator at ONSIGHT.

“We were very happy with the post process and the large viewing room was useful to allow clients to fully appreciate the 3D technology,” adds Paul Darter, Producer.

And the last word goes to Anders Løkke, International Marketing & Communications Manager at projectiondesign who explains: “We’re very happy to work with our partners Kaurus, ONSIGHT and RGB Communications who all made this happen! It’s a real achievement to be involved in a project that reflects the application in which our projectors were created to be used for. Being associated with National Geographic Channel who has a phenomenal and worldwide recognition in photography is a tremendous achievement indeed.”

The commercial was filmed in Tenerife in April 2010 for Samsung and National Geographic Channel. It involved a complicated week long, multi location shoot with up to 40 crew. 3D filming was using two Genesis cameras on an Element Technika mirror rig.

ONSIGHT's Lab & Post team handled the media after it was eventually flown back following being stranded along with kit and crew due to Volcanic ash. Lab & Post staff captured the rushes for offline and sent files out to the Director to cut, before providing HD and 3D conforms for the online, VFX and compositors. David Cox performed all the complicated composition on the 3D Mistika and all client attended 3D on-line work and mastering was carried out in the ONSIGHT's 3D Mistika projection suite.