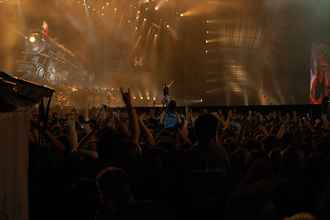 Rock legends AC/DC have just completed 3 nights playing at the River Plate Stadium in Buenos Aires to sell out crowds. Serpent Productions were there to catch the action using 20 HD cameras, including 15 REDs.

We have a long history with Serpent Productions so when director David Mallet decided to shoot the live show in Argentina using multiple RED cameras this month, On Sight was the natural choice to turn to.

After workflow planning for the three day 20 camera shoot, it was up to On Sight to make sure everything went smoothly. Axis Films took care of all the RED, HD cameras and production equipment. Axis Films also managed all of the digital rushes produced during the three sold-out shows.

While down in Buenos Aires, AC/DC took some time off from rocking to receive a distinguished honor, as the Argentine government, in honor of the band's decades of rock, presented the band with the title of "Distinguished Citizens of Buenos Aires." Acca Dacca's latest album Black Ice is available from their website. Watch this space for news of the live DVD.

The 'Black Ice' concert is currently being offlined by Serpent with the HD Lab providing preparation for post services and data back-up with HD Hire providing edit systems.

To further prove On Sight's RED credentials don't just take our word for it. "I have had a chance to visit On Sight and spend significant time with their staff. I've seen their level of professionalism and skill with the RED ONE camera and associated workflows first hand, and they totally get it. I've seen the results they get shooting and posting RED ONE footage and they are exceptional. All the deliverables for dailies to the finished product, for TV all the way to the big screen, the On Sight group can no doubt work with you and get you what you need, when you need it." Ted Schilowitz, Leader of the Rebellion, RED Digital Cinema.