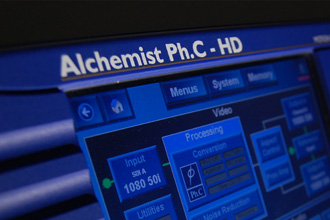 On Sight 'conjure up' the Alchemist Ph.C-HD

After committing to a beta testing programme over a year ago On Sight found themselves one of only two companies in possession of one of the most sought after high definition broadcasting ‘pieces of kit’ in the world, the other company being the BBC.

Snell & Wilcox’s Alchemist Ph.C-HD has a legacy of the best motion compensation and standards conversion going back to the early nineties, the era of high definition meant that the proprietary algorithms had to perform that much better, On Sight were on hand to help that happen.

For Snell & Wilcox that meant looking beyond the footage they were testing with in their lab and asking On Sight to put the Alchemist to work in their extremely busy HD LAB.

On Sight see the widest range of content going through the facility and were able to give Snell & Wilcox valuable feedback about performance across anything from sports to drama.

Steve Biucchi, Sales Manager of the Alchemist Ph.C-HD at Snell & Wilcox: “Partnering with On Sight was attractive to us as we recognised that they have been in the high definition world nearly as long as we have, they also offered this unprecedented range of high def content which we could test the product on.

“It was important to us to have this range of content available to us as worldwide content in HD is growing exponentially across the board and not just sports. Also with the Beijing Olympics just around the corner we knew that major broadcasting were keeping an eye on what we were doing”.

Infact Snell & Wilcox has already received an order from American broadcaster NBC for a significant number of Ph.CHDs for their Olympic’s coverage. Other orders include many from the UK post production world.

After an extensive period of evaluation, On Sight has confirmed their purchase of the Snell & Wilcox Alchemist Ph.C-HD. This is the first bought in Europe outside the BBC.

Being the earliest adopters of all the main HD formats has enabled On Sight to develop an unrivalled engineering knowhow when it comes to High Definition television.

On Sight are well versed in the complexities of HD transfers, cross-conversions and the differing HD specs of broadcasters around the world. On Sight Managing Director Simon Craddock says, “The Alchemist Ph.C-HD will enhance the full range of HD conversion and test facilities already available in On Sight’s bespoke HD machine room and will provide On Sight with the HD motion compensated conversions that broadcasters, producers and facility companies are now demanding”.