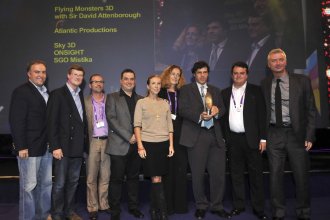 As IBC2011 draws to a close, ONSIGHT is thrilled to have seen Flying Monsters 3D with David Attenborough featured at the RAI Amsterdam and recognised at The IBC Awards on Sunday 11 September.

Congratulations to Atlantic Productions for receiving the IBC2011 Special Award with contributing partners Sky 3D, SGO Mistika and our team at ONSIGHT. This reward was for exceptional 3D vision in creating Flying Monsters 3D.  It is given to a project, person(s) or programme that has pushed boundaries. ONSIGHT also made IBC2011 Innovation Award Finalist, with SGO Mistika as supporting partner, for post production in the Content Creation category.

Produced by Atlantic Productions for Sky 3D and National Geographic IMAX, Flying Monsters 3D with David Attenborough required the latest in technology and resolution. Bringing to life the prehistoric world and evolution of pterosaurs was a fantastic challenge. The demands and multiple-format deliveries were completed at ONSIGHT’s digital Lab and Post facilities in London. ONSIGHT designed a bespoke workflow with two SGO Mistika systems at the heart of it. Mistika’s flexibility, powerful capabilities and management of RAW data file formats improved the workflow efficiency, helping to deliver quality and time sensitive results in real-time.

Anthony Geffen of Atlantic Productions added on stage, “I would also like to thank Simon Craddock, Andy Shelley and the team at ONSIGHT, and the team behind SGO Mistika, whose collaboration was essential for the success of the film. When we started this production, we didn't know how we were actually going to finish it. I'm proud, not only that we did so, but that we have embarked on a journey together to go forward to ever more exciting projects in 3D.” As a leading factual production company, Atlantic Productions gained previous success for this project in winning the first BAFTA award for a 3D film.

Simon Craddock, CEO of ONSIGHT said, "We are extremely proud that ONSIGHT has been part of this remarkable project. To be recognised with Atlantic Productions, Sky and SGO for the IBC Special Award is an honour.".

The annual IBC Awards ceremony was impressive and their highest accolade, the International Honour for Excellence, went to Sir David Attenborough. This marked his outstanding career in broadcasting, spanning over 60 years. Anthony Geffen accepted it on his behalf. Another highlight came from Atlantic Productions' showcase, displaying footage from Flying Monsters, as well as preview clips from ongoing 3D projects. These included Kew Gardens, The Bachelor Kingand Rockstar, of which the post production will be done by ONSIGHT.

For more on these prestigious awards, visit: www.ibc.org/creation