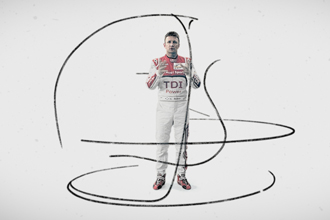 A Day in the Life of an Audi Driver features Audi Le Mans team leader Allan McNish describing what it takes to win the legendary Le Mans 24-hour endurance sportscar race – an event the German manufacturer has won nine times since 1999.

BBH Creative Directors Kev Stark & Nick Kidney conceived the concept for the film after viewing a presentation by the charismatic McNish, the Audi race team lead driver, describing the intensity, focus, precision & endurance required to succeed in the race.

Keen to find a way to convey the true intensity of McNish’s world, himself a former double Le Mans winner, BBH asked Hemming to explore stereoscopic 3D for the film. Hemming presented concepts and artwork for his vision of the film, using a combination of live-action and animation, and including illustrations by art director Tim Marrs. The dynamic renderings of the Audi Le Mans R18 TDI sports-prototype race car practically leapt off the page, leaving all committed to finding a way to achieve the same effect in the cinema.

Although a stereoscopic film seemed the perfect technique to convey the experience of an Audi Le Mans driver, much work was needed to translate the hand-drawn world of Hemming’s treatment into the 3-dimensional world of stereoscopic cinema. Never before had Passion Pictures attempted to marry conventional 2D artistic techniques like painting, drawing, photography & air-brush with stereoscopic 3D. How to seamlessly meld the two techniques proved to be the film’s greatest design challenge and success.

The process began by shooting McNish against a green screen using a 3D Red MX 4k / Element Technica Shooting package from ONSIGHT. Hemming edited the performance like any other film, but upon approval of the offline edit the film had to be corrected for both colour and depth. Left and right eye footage from each camera was then ‘keyed’ to separate Allan from the green screen so that he could be placed into the 3-dimensional world designed by Hemming and his team.

Utilising 3D computer animation software, McNish was immersed in the world of paint splatters, dynamic drawings, photo collage and highly detailed CG graphics. Every element in every scene was painstakingly translated from 2-dimensional artwork into 3-dimensional objects. Each of those 3-dimensional objects was then choreographed in space to give exactly the right sense of timing and depth to impart McNish’s story with the dynamism it deserved. The final imagery was corrected for colour and depth with multiple test screenings in 3D to ensure exactly the right effect was achieved in every scene.

Title: A Day in the Life of an Audi Driver