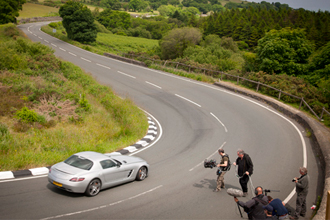 In© has created a content campaign for Mercedes’ new SLS AMG in 3D with the help of ONSIGHT's Camera Rental team.

The film is the centrepiece of a £1 million campaign for the new gullwinged supercar; it features ex-Formula One driver David Coulthard, who drove the car at speeds of up to 165mph along a closed section of the Isle of Man TT course.

In© (www.incword.com) is an agency that uses a 300-strong team of London and NY-based freelance editorial talent to create broadcast, digital and print content with independent credibility. Clients include 3, Martini, Rolls-Royce, Tourism Australia, Ford and Jaguar. The idea is to bring together journalist talent to come up with the ideas, then pitch those ideas to broadcasters, newspapers and media companies. The ROI is the coverage gained for the client and the content the media and the client have access to. Media taking this film include Sky 3D, Sunday Times, Metro, Fifth Gear (Channel 5 and Discovery) and Wired.

In© work with major stars like Clooney, Ewan McGregor, ACDC’S Brian Johnson and US TV host Jay Leno. Recently they made a film in LA with Leno on a secret racetrack in the Hollywood Hills driving a new Mercedes-Benz SLS AMG. They put the video online and got six million hits, voila everyone’s happy. Director Jeremy Hart talks about a new film with Mercedes in the Isle Of Man: “Mercedes asked for an idea with the same car here. We came up with the idea of getting permission to close off part of the TT Motorcycle course on the Isle of Man. Before we decided on the ex-racing driver David Coulthard we did think about a couple of rock star drivers, but Coulthard has impeccable driving credentials.

“We worked with ONSIGHT's Camera Rental team for stereography, cameras, rigging, and the post, Inition supplied quite a lot of extra kit and stereographers for it and we brought in Geoff Boyle as the DoP because of his expertise in 3D on the film Dark Country, Jonathan Smiles was the DIT and looked after all the data. The director was Pete Woods who hadn’t worked in 3D before but has directed ITV shows with Piers Morgan and worked with me on Channel 4 rally shows.”

Geoff Boyle was overall DP on the shoot: "I was brought in to this shoot as the overall DP and stereo consultant/stereographer. I worked with Pete & Jeremy to establish how we should do this and who we should get to supply facilities. Campbell Goodwille and Geoff Harrison were both bought in for additional stereography expertise.

Inition are gaining a reputation for 3D in the UK and Andy Millns commented on their part in this shoot: “We provided production services which were one of the main camera systems and technical expertise, stereography. Our SI2Ks went on the Pursuit Crane and the vehicle mounted stuff. It was good collaboration actually, ourselves and ONSIGHT are probably the two leading suppliers of 3D and we’re trying to pool our resources on a number of things.”