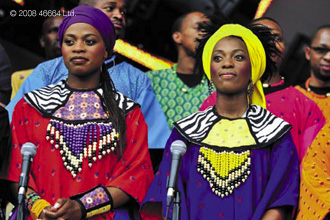 Nelson Mandela’s 90th birthday tribute concert in Hyde Park in June was one of the musical high notes of the summer – a fitting salute to the world leader and Nobel Peace Prize winner.

Named the 46664 Concert, the event was the latest in a series held around the world to raise money for Nelson Mandela’s 46664 HIV/AIDS charity. The number refers to the former South African president’s prison number on Robben Island, where he was notoriously incarcerated for 18 of his 27 years behind bars.

Timed to coincide with the 20th anniversary of the June 1988 Free Mandela concert in London, it was a star-

studded event. Hosted by Will Smith, it featured an eclectic line-up including Queen, U2, Annie Lennox, Amy Winehouse and the Sugababes, and was attended by some of the biggest names in pop and politics, including prime minister Gordon Brown and, of course, Mr Mandela himself.

Held on the evening of 27 June in front of 46,664 fans, the four-hour co-production between 46664 and Serpent Productions was also one of the biggest and most technically challenging OB events of the summer. Four broadcasters were on site, all making their own programmes from the live world feed and sent by satellite to a multitude of other broadcasters globally.

A two-hour version of the live show was also needed for transmission shortly after the event had finished. This meant careful pre-planning by the event’s television producers Serpent Productions, headed by Rocky Oldham and Dione Orrom. Pre-production meetings began in February, with OB fi rm NEP Visions putting its state-of-the-art 20-camera triple-expanding OB vehicle HD1 on the job. Oldham recalls: “Aesthetically we wanted to capture the vibe of the event and that’s exactly what director David Mallet did. His talent is putting the viewer in the best seat in the house.”

The specification was for a live multi-platform HD/SD broadcast in stereo and 5.1, with recording on to HDCAM SR with surround sound (discrete and Dolby E) and stereo audio. Technical experts On Sight handled the set up of three Avid edit suites and a Unity storage system to handle the job.

“It was a very quick turnaround,” declares Oldham. “We were doing four hours live to air and a two-hour cut which had to be on air within a couple of hours of the show ending.” On Sight’s support didn’t end there. At the company’s HD LAB, a master was created for re-versioning.

The audio was encoded to Dolby E and folded down to stereo before being inserted on to HDCAM SR masters. Subsequent transfers were also created at On Sight’s HD LAB for further broadcasts. The real technical challenge of the project was to cope with a complex live HD event while simultaneously producing a two-hour edit.

On Sight’s job was to supply and manage the technical side of the project, giving the show’s editing team Marc Eskenazi and Tim Thompsett the freedom to focus on the creative side of the edit.

Says producer Dione Orrom: “Marc has done lots of live events with director David Mallet in the past. He and Tim are very steady hands – they are used to working fast and keeping their heads under pressure.

“It was all about making creative decisions very fast. The hardest thing was deciding which acts to include, even though the show hadn’t finished. It certainly kept us on our toes.”

Rocky Oldham adds: “It’s all about having the right people and the right kit. We went with NEP Visions as an outside broadcast facility – because they know us and how we work.

“We wanted On Sight to handle the post side of the whole operation because it has the right knowledge and experience. Its technical back-up is second to none, which is crucial when there is no time to fix things if they go wrong. You’ve only the one chance and Mr Mandela wasn’t going to wait. He’s waited far too long already.”