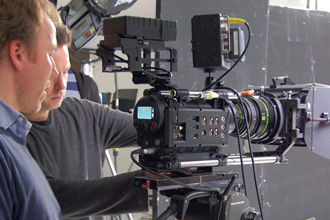 Programme-makers are showing an interest in tapeless production despite the steep learning curve it requires.

If high definition has been the big story in broadcast technology in recent years then 2008 is set to be the year that tapeless production takes off. Increasing levels of HD commissions from broadcasters, coupled with the emergence of a new breed of broadcast-quality tapeless cameras is making tapeless HD a reality.

It’s a trend that hasn’t escaped On Sight head of engineering Richard Mills, who estimates that currently around 5% of TV production in the UK uses tapeless technology – a figure that is rising fast if the number of enquires at On Sight are anything to go by. It’s not hard to see why. Recording to high-capacity plug-in memory cards removes the need for tape, VTR machines and the time-consuming and expensive process of ingest for editing at a stroke.

Tapeless has already earned itself a reputation among some forward-thinking commercials and music video directors because of its practical advantages in a very client-oriented industry. Says commercial director Michael Lindsay, who has already experimented with tapeless cameras such the RED camera and Panasonic’s P2 format: “You can access media very quickly, removing ingest time which is useful for signing off shots with agencies or executives on set.”

But instant access to digital files without the back-up of a hard copy represents an unnerving culture shift for many producers. “There’s still something very reassuring about having tape in your hand,” admits Lindsay. “The hardest thing with tapeless is having to rely on digital files.

There are a lot of stories out there about people simply losing data.” Tapeless enthusiast Bob Ford, managing director of Loki, was one of them. “The plug-in cards can only take so much information so need constant downloading. On one occasion we lost some data and nobody knew how it happened – it was possibly human error, but it’s a problem you wouldn’t have with tape or film.”

On Sight’s Richard Mills admits that data handling is one of the biggest hurdles faced by tapeless novices. “It’s the critical point of the whole operation,” insists Mills. “Most cameras have menu deletion processes, and people can select the wrong buttons under pressure if they are not properly trained.”

The long-term storage of files is another important consideration, which ideally needs to be planned at the outset. “On larger projects, particularly where shooting ratios are higher and where there are a lot of episodes, you have to make a decision about whether you archive rushes after edit.”

One essential component of any company considering tapeless is expert advice, says Michael Linsday, who is working closely with On Sight on workflows for the new high-end RED camera system. “On Sight has a real ‘can-do’ mentality and its people are willing to investigate new technical issues on your behalf if you are interested. It feels more like collaboration than anything else.”

Once the workflow is sorted, there are plenty of creative benefits to using tapeless, with cameras such as Panasonic’s AG-HVX200 and Sony’s PMW-EX1 offering new possibilities such as off-speed recording. “Phased out with digibeta, now off-speed is back,” enthuses Lindsay, who has already used the P2 system’s off-speed functions on work for fashion industry clients.

One recent production on which On Sight advised and posted was the award-winning The Battle of Cable Street, which combined live action and animation shot on the HVX200 using the P2 system. Says On Sight’s Mills: “The more innovative producers have already used the new generation of cameras to great effect with slow motion, variable frame rates, stop frame animation and interval recording.”