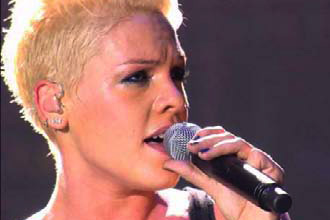 P!NK’s recent Wembley Arena Concert was yet another epic HD shoot for Serpent Productions, typical of the slick style they produce on regular basis.

The event was Directed by David Mallet, shot by NEP Visions on about 20 HD Cameras at 1080/25p and posted entirely by On Sight Upstairs. On Sight digitised all the material after the shoot on multiple dedicated digitising systems for speed.

The edit was put together by Nick Morris on Final Cut Pro before on-lining in HD at On Sight Upstairs, where it was graded in HD and played out various

HDCAM masters: an explicit and non-explicit version as well as DVD and TV cut-downs were produced.

On Sight also dealt with the HD standard conversions using

the Alchemist-Phc-HD for US delivery at 1080-59.94i and SD down conversions in their machine room.

Producer Rocky Oldham commented on his long relationship with On Sight: “We used them for all our post, I think if you add up the years I’ve known Simon and Colin it must be about a 30 year relationship”.

Rocky explained the process: “We did a line cut with the vision mixer, brought it back to On Sight and overnight digitized it all including the line cut. We had to a very fast turnaround edit, about two days, for a Microsoft Networks Broadcast. That was only the first stage and then we re-edited the entire project for Zomba New York which we did at On Sight on FCP. From that we made two television versions both SD and HD and a DVD version.

“We work the HD LAB an awful lot now even though they’ve never really put themselves out as an edit facility we’ve always edited in their places for the last twenty odd years. They’ve also got all the machine room equipment after taking a big breath a few years ago and getting in to Hi-def very early on.

“We’re very much fans of high definition, as live music producers you’re forced to always be futureproofing. All the major record labels and artists want their product as future-proofed as possible so you have to be on that edge of technology all the time.

“On Sight keeps us at that edge and this project was certainly post produced and mastered on high definition all the way through. As I said we do all our post through them and occasionally rent equipment from them. They give us very good service.

“Their engineering knowledge is second to none and they’ve definitely guided us through what high definition is and how to use it, which they carry on doing on a daily basis”.