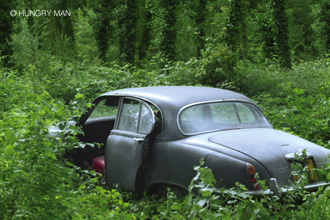 HD filming helped to transform the ordinary into the extraordinary.

Commercials showcasing the quality of high definition in recent years have tended to be big, spectacular, eye-catching affairs. But agency Young & Rubicam Singapore’s latest 30-second spot for Sony Asia, What is Beauty?, has taken a more low-key approach.

The creative brief given to directing duo Samuel Christopher at production company Hungry Man, and DoP Luke Scott, was to reveal in HD the hidden beauty of ordinary objects that wouldn’t normally get a second glance – from a car abandoned in woodland, to dead leaves, puddles, clouds or a flower growing in a concrete wall.

Producer Matt Jones recalls: “The treatment was based on the script which asks: ‘How does ordinary become extraordinary? All you need is a new way of seeing – a higher definition’.”

Shot on HDCAM SR at 1920 x 1080 over a single day earlier this summer in east London, the idea was to give the advert a generic European feel, filling it with the kind of images you could see in any town or city.

A finished version was then sent to Sony in Singapore on a Sony HDCAM SR master with On Sight transferring the rushes to Beta SP for an offline and providing an SR compilation tape for the master conform. “It was a balancing act

between showing the colour potential of HDCAM SR without making the film look artificial,” recalls Jones.

Frame rate conversions performed by On Sight were also required when it was decided to shoot some of the action at 50p instead of 25p. “A couple of scenes, such as footage of a young girl blinking, were shot at 50p so that they could be slowed down to give the spot a bit more of a

“I have used On Sight several times and they have always been very helpful,” says Jones. “With everyone feeling their way a bit with HD, I found it handy that they were able to answer my questions every time – I’ll certainly be going back.”