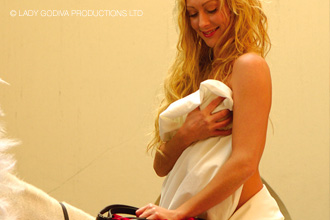 Film-maker Heath Jones’ first film, Lady Godiva: Back in the Saddle, had an unusual inspiration.

The chance purchase of a box of Godiva Belgian chocolates in a Detroit airport gave the film’s US based screenwriter and producer the idea for a film based on the famous lady’s naked ride through the city of Coventry in the 11th century.

Set for a cinema and DVD release this autumn, the £3.5m British comedy from Koralis Productions is a romp in The Full Monty tradition, centering on controversial plans to build a casino in the city’s memorial park.

Shot on location in the West Midlands, it could do for Coventry what The Fully Monty did for Sheffield.

A former independent financial adviser, Jones reasoned he could write the screenplay and raise the money for the film himself by setting up an enterprise investment scheme – which he did.

Jones recalls: “The logic was that if the film wasn’t successful we wouldn’t have the cost of blowing it up to 35mm. The relatively low cost of HDCAM SR was also a benefit because we didn’t have to worry about the number of takes per scene – which averaged around 10.”

Jones worked with editor Sanjeev Mirajkar, who reveals: “The idea was to make the film as fast-moving and pacey as possible.” Once the edit was approved, the film was taken on drives as uncompressed HD Quicktime files to On Sight where the conform and grade was done using Final Cut Pro and Final Touch.

The On Sight experience was relaxed and professional, says Jones, even when cashflow hold-ups meant editing had to be done later than scheduled.

Jones is so pleased with the look that he plans to repeat the HDCAM SR experience on his next feature, which he is to direct. “It was very rich with absolutely amazing detail.”