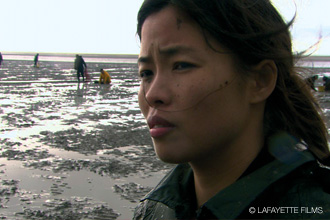 Ghosts in the machine

Nick Broomfield is leading the way for a new generation of film-makers turning to high-definition shooting.

Over the years, Nick Broomfield has perfected his own, individual filmmaking technique. His documentary portraits – from rock singer Courtney Love to white supremacist South African Eugène Terre’Blanche – have been intimate portraits shot with a skeleton crew.

Which is one reason that he doesn’t like using film formats such as 35mm for his work. “A film camera dictates a lot of things. It has a huge impact on the production in terms of the number of personnel,” declares Broomfield.

“Shoots get so big you need to organise parking for lots of vehicles and catering to feed everyone. You end up with a large number of people milling around and they just get in the way. I detest all that,” he explains. “Everything takes so long I’m always bored by the time we get to shoot a scene – which isn’t good.”

But Broomfield has found a new tool to help him dramatically cut down the size of crews without sacrificing image quality – high definition cameras. His latest film, Ghosts, is a dramatic reconstruction of the deaths of 23 Chinese cockle pickers in Morecambe Bay in 2004.

It was shot using the Sony HDW-F750 HDCam camcorder, with additional material from the Sony HDV-Z1E HDV model, by a team of just five; a director of photography, sound recordist, scriptwriter, translator and, of course, Broomfield himself.

Most of the film could be shot using available light thanks to the light-sensitivity of HD cameras – something that Broomfield took full advantage of.

In one sequence he woke up his cast at 5.30am by shining his HD camera light into their bleary-eyed faces - simulating the long hours and tough conditions they

Broomfield and his crew shot most of Ghosts last year and began the edit in early 2006 using the Final Cut Pro editing facilities at On Sight in London and an FCP edit suite in Broomfield’s office.

Because all the dialogue was in Mandarin a provisional English translation was added to make editing and eventual subtitling easier.

With the offline edit complete, On Sight carried out an HD conform and prepared a pre-grade HDCAM SR master that was outputted for grading before being returned to On Sight for the final mastering, followed by a film transfer.

Broomfield is clearly impressed with the results and will use a similar set-up on his next project – a film about Iraq, which will also be shot on HD using a small crew and an amateur cast. “What’s interesting is just how much more contemporary high definition looks,” he says.

The use of HD in drama will be revolutionary, he predicts. “What we are seeing is the birth of a new way of making narrative films. I think there is a new breed of film-makers coming through that are making use of HD to make films much faster with smaller crews.”