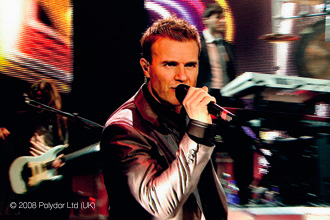 Take That's Beautiful World Live DVD was the result of a two day shoot at the O2 Arena in Docklands, at the culmination of the group’s national tour last December.

The group wanted this DVD to look different from the pace of their last production, recalls director Matt Askew, who has worked with the band on their last two tours.

“The band didn’t want it to be a heavily cut concert – the last one was quite staccato and this time they wanted something more film-like. That was the brief – I had to translate that into something that works.”

It was a complex shoot, with a lot of different elements to fit in, recalls producer Dione Orrom from Serpent Productions. “There was an A and a B stage where about a third of the show was shot, and there were a lot of moving elements on stage.

Shot with a 21 cameras OB provided by CTV, Askew’s main aim was to capture the show’s theatrical ambitions and allow the band members' individual personalities to come through in consultation with show producer Kim Gavin. “We decided to go for a lot of moving cameras shots, which sustains the action better than static cameras,” says Askew.

Askew’s relationship with the band was a big help when it came to the camera set-up. “Usually the promoter sells all the tickets and there’s nowhere to put the cameras, but Take That held onto seats until I decided where my cameras were going to go.”

Using a range of HD cameras including Jibs, Technocranes, steadicams, hotheads and handheld cameras, Askew shot on HDCAM at 1080 25Psf. “Shooting 50i looks too clean for music – we found the texture with 25Psf is much better.”

It also cut down the amount of grading that post house The Joint had to do. Says colourist John Cryer: “The brief was to create a filmic intimate feel while making the band beautiful and glowing. Matt also wanted to make ensure that the huge scale of the event at the O2 Arena was not lost.”

Once shot and posted, the show – which included a second DVD with 48-minute documentary plus a commentary from the band about the concert – was sent as HDCAM SR masters to On Sight's HD LAB for full technical quality assessments.

This included checks on picture and audio quality, with reference to clarity, levels of noise, colour and 5.1 surround-sound audio, followed by HD standards conversions – all of which had to be turned around to an extremely tight deadline with down-conversions to NTSC.