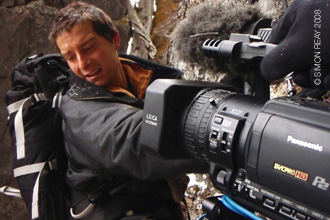 Climbing to another level

On Sight’s latest range of high end tapeless cameras from Panasonic and Sony are set to raise the bar on tapeless production and meet broadcaster’s stringent HD requirements.

HD specialist On Sight’s reputation for being ahead of the game with the latest kit was underlined recently with the order of the latest large format tapeless HD cameras from Panasonic and Sony.

On Sight is set to become the first company to take delivery of Panasonic’s newly-launched 1920 x 1080 P2 Varicam range – officially unveiled at NAB in April. On order for delivery this autumn will be the AJ HPX-3700 – branded as a high end camera with a 2/3 inch 2.2 megapixel CCDs imaging for film, commercials and episodic TV production, and the AJ HPX-2700, the 2/3 inch CCD 1 megapixel model aimed at the sports, documentary and independent filmmaking market.

On Sight Head of Engineering Richard Mills insists that the new Panasonic P2 card-based cameras will be “a breakthrough” in the world of tapeless production, offering the proven benefits of tapeless workflows as well as meeting broadcasters’ stringent HD qualification rules.

Panasonic’s new high quality recording formats based around its AVC-Intra codec have clearly made a big difference, offering programme makers much higher recording quality than DVCPro HD. “AVC-Intra 100 codec offers 100Mbits/second recording but only takes up the space of DVCPro 100 HD, while the AVC-Intra 50 records the same quality as DVCPro 100 HD but takes up half the space – effectively doubling card capacity.”

Better still, the Panasonic cameras retain the Varicam AJ-HDC27 look, which closely resembles the latitude of film, and offer the off-speed option in 720p mode for slow motion photography which was such a big hit in natural history production.

“Panasonic have applied a lot of the image processing and R&D learnt from the [tape-based] Varicam and applied that to the new cameras,” says Mills.

On Sight Hire Manager Sam Higham predicts the new P2 HD range will be a big hit with producers. “The Varicam was the camera that people loved the look of on tape. Now that Panasonic have combined the Varicam look with the benefits of tapeless, these cameras are going to be very exciting.”

Panasonic isn’t the only manufacturer upping the ante in tapeless. Sony has also been working hard on expanding its XDCAM range. This month saw On Sight become the first hire company to take delivery of Sony’s new XDCAM model the PDW-700, which boasts 50Mbit/second HD recording onto dual layer professional discs with three 2/3-inch CCDs, each with 2.2 megapixel resolution.

According to Higham the emergence of the new breed of high quality tapeless cameras from Panasonic and Sony is significant. “It’s really exciting because it confirms the growing significance of tapeless workflows in the industry,” he declares.

“I’m amazed how quickly people have got comfortable with it… our tapeless camcorders - the Panasonic’s AG HVX-200s and Sony’s PMW-EX1s - have been flying off the shelves, with a lot of producers reporting that they’ll never go back to tape.”

But Mills confirms that there is still some resistance to the tapeless formats, due primarily to misunderstandings about the risks. “Apocryphal stories abound about disasters, although it’s always difficult to pin any down. But what we have found at On Sight is that as soon as people understand the workflow and understand the measures they have to take to ensure the data is handled correctly they realise that it’s a workable format.”

The main hurdle is handling data correctly on location, he stresses. “At On Sight we like to train programme makers in data. It has to be handled by someone who knows what they are doing.”

With broadcasters insisting that HD programmes should be made with only a 7-9% budget uplift, an extra person on location person may seem unaffordable, but its important to remember that there may be big savings, says Mills. “If there’s no budget for a clapper loader someone on the production team has to take responsibility and be trained to manage the data – whether it’s the sound recordist, camera operator or production assistant. One production manager reported that on 100 hours shooting the production saved 3-4 days on digitising and that paid for someone to manage the data. If it’s done by someone on the crew, the money is freed up to do other things.”

Money is saved primarily on faster file ingest and logging time, explains Mills. “Several of the productions we have worked with have really liked two things with tapeless; the improved workflow – with fast file transfer; and the ability to organise the data. Suitable metadata makes it easy to sort and manage the clips for the pre-edit, meaning the transition into post needs less logging and is faster.”

To date, Panasonic’s P2 range has proved less popular than XDCAM on some shoots, notably those involving remote locations, because of the large number of cards needed to store data on. “Unless you take a huge stack of cards with you, you are going to have to at some point transfer onto a secure storage system, and if you are on location for a long time and are without power that can be a bit of a hurdle,” admits Mills.

The upside for tapeless in remote locations is its improved durability over tape – less prone to humidity and dust. Panasonic has also gone some way to addressing the storage issues by introducing new high capacity P2 cards, offering a new 32 Gigabyte card with 64 minutes of recording at AVC-Intra 50 or 32 minutes at AVC-Intra 100.

A new 64 Gigabyte card will be available from the autumn.

The good news for editors is that while tapeless camera formats have developed in leaps and bounds in recent months, so has their interoperability with NLE systems. “With tapeless it’s possible to pre-label the data with information that can be transferred directly into the NLE,” says Mills.

“Final Cut Pro has a very good hook up with XDCAM and P2, while Avid’s new DX system is a great improvement – updating Avid editing for the tapeless world.”

On Sight’s latest range of high end tapeless cameras from Panasonic and Sony are set to raise the bar on tapeless production and meet broadcaster’s stringent HD requirements.