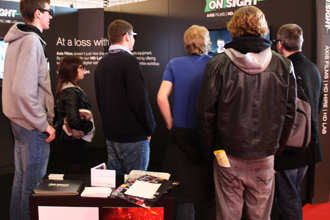 Taking place at the George Lucas stage at Elstree Studios, the BSC New Equipment & Technology show gives BSC members a chance to look at the latest kit & services on offer in the film & digital market.

ONSIGHT were on hand at the show last weekend to promote the unique link between its Shepperton Studios' based camera hire department, and its Lab & Post facility located in London W1.

The relationship between the acquisition and technical services sides of the company means it can fully support clients throughout an entire workflow. This allows them to pick and choose the services they receive and enables discounts when using more than one department.

ONSIGHT's stand had two showreels playing. The first was AC/DC's recent Iron Man 2 promo video, using footage from a live gig shot by Serpent Productions on 15 RED cameras. Both the Camera Rental team and the Lab & Post team worked on this project without losing a single frame - despite the large amounts of data shot by the 15 cameras over 3 nights in Buenos Aires.

The second showreel required 3D glasses and proved to be very popular; showcasing some of the many 3D projects that ONSIGHT has been involved with. This had a mixture of live shots taken using various 3D rigs, through to 3D animation clips.

Since The British Society of Cinematographer's formation in 1949, its prime objective has been to promote and encourage the highest standards in the art and craft of cinematography and ONSIGHT were proud to become a Patron member this month.

Their membership, which is by invitation only, comprises of some of the most talented Directors of Photography and Camera Operators in the United Kingdom. It also encompasses many distinguished friends and patrons from the film and television industry.

ONSIGHT are patron sponsors of the British Society of Cinematographers. Richard Mills, ONSIGHT's Head of Engineering, has previously spoken at many BSC events including their Film & Digital Camera Evaluation that took place in July, for which we also supplied file-based HD cameras, HDCAM SR vtrs and technical lab services.

Find out more at www.bscine.com