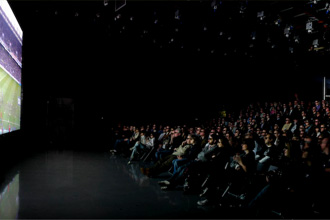 The film, which reportedly cost £180m to make, will open up new opportunities for an elite group of 3D specialist companies in the UK. Avatar is already expected to join the handful of films that have grossed more than $1bn at the box office. Tantalising trailers of the film this weekend whetted the appetites of rival Hollywood studios which are now scrambling to get a slice of a burgeoning 3D market. Avatar was filmed using a ground-breaking camera system developed by Cameron, the Canadian director whose past projects include The Terminator, Aliens and Titanic.

A number of UK companies that have been developing new 3D technologies over several years are poised to capitalise on the response to his latest film. They include Axis, which is filming a promotional 3D video for the US television drama 24. The company filmed the world's first live 3D sports broadcast at the Calcutta Cup rugby union match between England and Scotland last year, and is about to begin shooting a full-length horror film early next year.

Paul Carter, head of cameras at Axis Films, said yesterday: "There is now money in the system and we will see things move forward on the back of Avatar. Once the public gets a real look at the film it will take off

"The UK's 3D industry is still very much in its infancy but is growing up rapidly. The Americans, as always in film, are leading, but they see us getting involved in what they are doing."

Avatar, due to be released in the UK in December, comes 115 years after the 3D film process was patented by the British film pioneer William Friese-Greene. The Queen's coronation in 1953 was filmed in 3D and will be shown for the first time on Channel 4 later this year, during a week-long series of programmes devoted to 3D.

According to the UK Film Council, which recently organised a 3D master class for film-makers, digital 3D cinema screens in the UK are set to increase tenfold by 2012.

Street Dance, featuring the break-dancing Britain's Got Talent winner George Sampson, will be the UK's first full-length feature to be shot in 3D.

Dennis Laws, manager at London's Imax cinema, said: "The reaction to the footage of Avatar that we have shown has blown people away. It is a huge leap forward."

Paul Carter was interviewed for The Independent - www.independent.co.uk