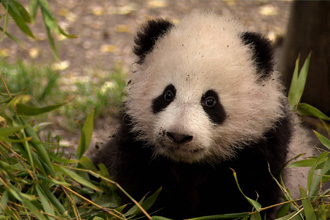 ITN Factual has made its first ever HD series for Animal Planet with the help of Sony, a six parter about one of the Earth’s most endangered species the Giant Panda, shot on location in China on the HDW-F900R HDCAM camcorder.

An ITN team headed by director Amanda Feldon went behind the scenes of the first, largest and most successful panda breeding centre in the world at Wolong in South West China to make Pandamonium, which witnesses the daily struggle of keepers and staff to preserve one of the planet’s most at-risk species.

Feldon teamed up with Beijing-based cameraman Mitch Farkas and his HDW-F900R camcorder to shoot the series which shows unique footage of pandas being born, as well as recording the extraordinary efforts being made to breed pandas using both artificial insemination and the animal’s sometimes violent, natural mating.

Production manager John Keyes says: “It was Amanda’s first HD shoot and she had a clear idea of what she wanted the series to look like. It was shot at 1080 25P for a filmic look. There’s a lot of mountains and scenery so we wanted our production to make the most of it.”

The series of hour-long films covers the difficulties that arise from artificially breeding giant pandas, and tracks the progress of You You, the last panda to give birth during the latest breeding season. It also includes original footage of wild pandas in the Foping reserve in Xian province.

Digitised and offlined at ITN’s documentary department on Avid Adrenaline, production manager John Keyes admits to being amazed by the quality of the HDCAM pictures when shown at full resolution at HD facility On Sight.

“To see it in full resolution was fantastic - the pictures we got were phenomenal although it really woke us up to the practical side of HD production,” says Keyes. “We learned that there is no hiding place in HD – you have to have a very good cameraman as any small loss of focus in the final image is very noticeable.”

One issue with the photography was finding the right camera setting for colour balance, as the series needed to be able to cope with footage in the dark panda breeding pens (intended to be like dark caves in the mountainside where they would normally breed) and much brighter footage out in the open in Chinese forests.

Says Keyes: “We made five trips out to China on Pandamonium and the quality of the camerawork increased exponentially over that time. It was a steady learning curve which we managed with advice and adjustments from On Sight.” The crew faced serious production challenges throughout, with one part of the series requiring the HDW-F900R being carried on 10 mile treks into the forest each day in order to find and film female pandas in the wild.

If the shoot was smooth, working alongside staff at the panda centre was initially challenging as it took time to build a rapport with the crew.

An unforeseen event was the earthquake in China earlier in 2008, which destroyed much of the breeding centre, which was located near the centre of the quake. Animal Planet commissioned ITN to return to make a sixth programme to add to the original five part series, focussing on the drama of rescuing the pandas - many of them heavily pregnant – by moving them along mountain roads to temporary shelters nearby.