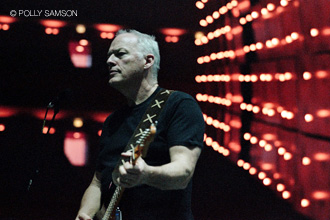 A night to remember

Pink Floyd guitarist David Gilmour is a rock legend with a reputation for quality.

“As the leader of Pink Floyd, David has always been an artist who has never compromised with his work,” insists Andy Murray from Gilmour’s management company, One Fifteen.

No surprise then that when One Fifteen Management suggested he should make a DVD of his latest tour, Gilmour and director David Mallet opted for one of the highest quality HD formats available – Sony HDCAM SR.

Remember That Night: David Gilmour Live At The Royal Albert Hall was shot last May at the culmination of Gilmour’s two-month world tour, which followed the release of his third solo album, On an Island.

Produced by Serpent Productions with OBs supplied by NEP Visions, the DVD was filmed over several nights, with the emphasis on remote on-stage cameras and hot-heads to capture key shots of Gilmour and keyboard player Richard Wright – without cameramen getting in the way.

“We spent a lot of time in pre-production looking at lighting levels,” recalls Orrom. “The style of lighting designer Marc Brickman was very dramatic. He used a lot of smoke, lasers and strobes which meant that there were big extremes to cope with – from very dark to very light. Our guys had to work very hard to find a balance that worked.”

Keeping that quality throughout the show’s post-production was equally important, with the release required in three formats, all more than five hours long – standard definition DVDs, plus a Blu-Ray DVD version for Sony BMG and EMI to release worldwide and a HD-DVD version for EMI alone in Europe for release this autumn.

In addition, HD and standard definition TV versions were edited in different configurations. Post-production and HD crossconversions were done at On Sight, which has a long-established relationship with Serpent Productions – one which One Fifteen Management found particularly useful.

“David Gilmour owns his own masters so there’s far more pressure on us as a management company to have an opinion about what formats we are making things in and on what format to deliver,” explains Murray.

Offlined on Lightworks Alacrity, most of the show’s additional documentary elements were edited on Final Cut Pro as well as Avid. Both Sony Xpri and Apple Final Cut Pro were used to online, with final surround sound and stereo audio mixed by Gilmour’s own in-house engineering team. This was then laid back to the finished HDCAM SR masters at On Sight, using 5.1 Dolby E.

“We had endless post discussions about HD conversion rates,” recalls Murray. On Sight’s Snell & Wilcox Niagra noise reduction tool and the Alchemist Ph.C–HD were used to provide HD cross-conversion from 25P to 59.94 before HD encoding for Blu-Ray was carried out at Deluxe.

Says Murray: “On Sight was extremely helpful in terms of keeping us up to date with approvals, choices, timing and also educating us about how the formats work and what the likely transfer issues would be.”