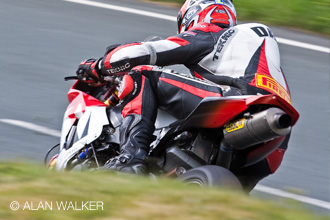 A new era for the TT races

Producer North One revolutionised coverage of the Isle of Man TT Races this year with help from On Sight’s Axis Films and HD Hire departments.

When North One took over coverage of the Isle of Man TT races this year the challenge was simple. The sports producer promised to get under the skin of one of the most exciting events in the motorcycle racing calendar and bring the story of the 2009 race to a bigger worldwide audience.

For North One’s 60-strong production team the challenge was how to bring the personalities behind the race to the fore and make the intricacies of a time trial-based race intelligible to all. Part of the solution was to up the ante on the race coverage, bringing viewers exciting new perspectives from new camera positions – all shot in HD. The cornerstone was the use of a combination of on-board cameras and aerial footage shot from a helicopter to convey the drama.

New perspectives on the race

Says head of production Robert Gough: “We used a Cineflex gyrostabilised HD mount which meant that pilot Mark Barry-Jackson could get our aerial cameraman Simon Werry into the right positions to get really tight shots into the bikes.” “Aerials were critical because whilst you can field as many ground-based cameras as you like, by the time the bike has appeared in the viewfinder at 150mph and you pan around it’s gone.”

Gough explains that the helicopter footage provided long sequences which could be combined with the on-board cameras to give us the basics to make sense of the action.” Ten onboard miniature cameras recording onto solid state were finished by OB provider SIS LIVE just a week before the race. “It was nail-biting stuff, but we knew we couldn’t use mini-DV tape systems because the enormous vibrations on a TT bike would lift the tape off the record head.”

On board shots offered forward facing and rear facing shots as well as shots of the suspension moving to show the unbelievable strain on the bikes. Another way of showing the pressures on bikes and riders was through the shots captured by the Hi-Motion camera operated by specialist cameraman and Isle of Man resident Bob Blockley.

“At standard frame rates you never really appreciate the stresses and strains on the bikes and riders, but the Hi-Motion really brought that to life. Recording at 600 frames per second it revealed the bikes flexing because of the torque and you’d see little puffs of smoke as the cowling scraped the road. It was fantastic,” declares Gough.

Blockley’s other job was to co-ordinate camera movements around the course for the ten camera teams shooting on XDCAM HD cameras. North One had used XDCAM in SD mode on its World Rally coverage and was already impressed by the PDW-700’s cache function – which means you can operate the camera in perpetual recording mode and don’t miss shots when fast-moving bikes arrive suddenly on the scene.

Supported on location by Axis Films, Gough reports that that the fleet of XDCAMs was problem free. “Companies like Axis give you confidence - you know that the kit has been well-maintained and well prepped. You can tell that by the mood and spirit of the cameramen – who certainly enjoyed themselves. If they are confident and happy you know the kit is being well supported.”

Other XDCAM benefits were the robustness of the PDW-700s shooting to optical disc, and their compatibility with the Final Cut Pro editing system used on the TT. But best of all they offered faster than real time ingest, which was a real asset for a production on a very tight turnaround. North One enlisted the support of On Sight’s HD Hire department to supply and support a multi-seat non-linear Final Cut Pro facility to take in the material. The team were required to produce 11 one-hour programmes on ITV4, two hour-long specials for ITV1 as well as international versions, but the main headache was turning around an hour long evening highlights show in just five and a half hours.

Gough recalls: “There was the output from ten cameras plus the aerials and material from the onboards which meant that a lot of media was arriving back at the edit at once. It was a colossal task trying to manage the workflow.”

Because the TT is a time trial the story of each race was told through the organiser’s data about who was fastest around the course. This was vital for steering the editors toward using certain footage from specific bikes at specific points on the course and constructing the edit combined with graphics and a 3D fly-through of the 38 mile race. The secret of the edit was in logging data accurately and trouble shooting technical issues quickly. With North One to produce race coverage until 2013, there is plenty of ambition to develop the coverage further next year, particular with the use of more specialist cameras and possibly the introduction of on-board telemetry and the use of the Virtual Spectator 3D graphics system.

Says Gough: “We received a lot of praise for our coverage this year, but we still have plenty of ambition to take the TT to the next level.”

Watch Valentino Rossi at the Isle Of Man TT 2009 - http://youtu.be/tojHoqp8WIQ