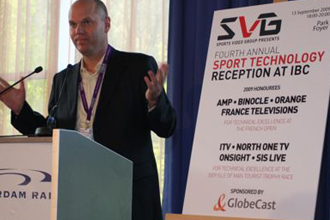 A TT win for North One and On Sight

The exceptional television coverage of the 2009 Isle of Man TT has won a prestigious award.

North One Television and On Sight were presented yesterday with a Sports Video Group award for their work on the 2009 TT.

The group’s objective is to share best practices that contribute to advancements in sports production and distribution, and ultimately improve the overall consumer sports experience.

The award was given in recognition of the scale of the TT coverage operation and the way the challenges were met using innovative technologies. The other award winner this year is the French Open in 3D, which was shown in cinemas in France and Spain by Orange. Previous winners have included the Beijing Olympics and the Tour de France.

The awards will be presented at the fourth-annual SVG Sport Reception and Technology Achievement Awards at The IBC Exhibition in Amsterdam in September.

North One TV Managing Director Neil Duncanson said: "It’s great to have our work acknowledged and this award is a tribute to everyone that worked on the races.

Filming a sports event that takes place on the famous 37¾-mile TT Mountain Course presents many unique challenges and I think that we were able to meet many of these and present this incredible event in a way that engaged a large global audience."

The coverage provided by North One TV was utilised for the Official DVD Review of the 2009 TT, so you can experience the exceptional, award-winning work by visiting www.iomtt.com

More details on this years TT can also be found here

Click here to watch the Isle of ManTT Promo - http://youtu.be/sE7H6f9PVwk