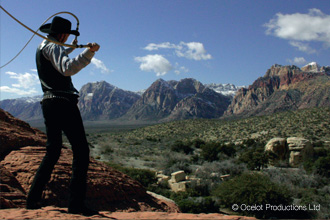 Tricks of the trade

How On Sight conjured up a few moves of its own when it put together Ocelot Productions' compendium of trendy tricks - The Book of Cool.

Ocelot Productions producer/director Fred Rees had been planning this project since early in 2004. ”The book of cool was a concept that grew out of an idea to make a football skills video, but I wanted to spread the net much wider than football by tracking down some of the coolest tricks on the planet and get some of the best in the world to give us a masterclass,” says Rees.

Rees had spent eight months seeking out the best talent and it made sense to shoot the project on the highest quality format he could afford. For this project that meant hiring Sony HD cameras, an HDCam player and online editing at On Sight.

Getting the posting system right was particularly important for a complicated project made up of 24 separate films shot over six months in 12 different countries across Europe, the USA and New Zealand. To keep costs down, Ocelot decided to keep it in the family, with Rees using his father – an experienced film director – as cameraman, and his two brothers as soundman and camera assistant.

Ocelot hired an HD deck from On Sight to compress the footage into SD for the offline, which they did at home on their Avid Media Composer. But, best of all, because the finished film would be onlined at On Sight using Sony XPRI, which used the same codecs as the Sony HDW-F900, there was no compression and inevitable loss of quality. “The compatibility of the XPRI with Sony HDCam is the thing that really settled it for us,” admits Rees.

In fact, the quality of the footage was so high that Ocelot didn’t have to hire a stills photographer to supply photographs for the printed version of book of cool. All they needed to do was supply timecodes to On Sight, which then lifted picture grabs from the footage and sent them to the designer as TIFF files.

“If we had shot in digibeta that side of the workflow would definitely have fallen down,” says Rees. Having produced an offline EDL for each film at home, this was then forwarded to On Sight where the masters were conformed. Then each feature was sent to posthouse The Mill for grading, before returning to On Sight for titling and audio layback. The completed DVD was then transferred to an HD-D5 59.94 master for Japan and for DVD authoring in the UK and USA.

The result? An award-winning DVD full of tricks that you definitely should try at home. But perhaps it would be best to start with card sharking or pencil spinning than chainsaw juggling or gun spinning.