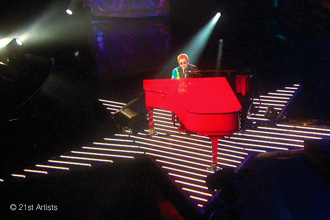 High-definition was the only choice for shooting Elton John’s musical spectacular The Red Piano.

For those unable to make the trip to Nevada, it was decided to make a televised version of the show in high-definition – the perfect format for capturing the show’s dazzling visuals. But capturing The Red Piano for a US network special on NBC and a DVD for release this Christmas was no small undertaking.

Produced by Serpent and PJM Productions, the show required a core team of A-list music video specialists to be flown out to shoot the show, which included Elton John classics, an explosive light show and giant video screens featuring actress Pamela Anderson as a pole dancer and Justin Timberlake as a young Elton.

Producer Dione Orrom had one big advantage when working out how to get the best out of the 4,000-seat Colosseum theatre with director David Mallet. She had already shot Celine Dion’s show at the same venue, and had a head start on working out the best camera positions with Mallet.

Shooting the concert involved the use of a total of 23 HD cameras, one mounted on an 80ft Strada crane. Says David Mallet: “The Colosseum hadn’t used a crane of that size before in such a small theatre, but the people at Caesar’s Palace were extremely helpful in accommodating our needs.

The HD camera, mounted on the crane, was vital in bringing a show like The Red Piano to life. The crane helped capture the dynamic show, producing amazing high-angle shots and giving the event a real sense of space.”

It’s always a trade-off between seating and cameras, explains David Mallet, who adds that more than 200 seats had to be removed to accommodate the kit. He also experimented with fibreglass bubbles on stage, specially constructed to disguise more HD cameras. In reality they only served to make the cameras more visible, but it was decided to keep the bubbles there.

Another issue was the lighting rig, explains Dione Orrom, with the video production negotiating extra lighting with the floorshow design team. “We shot two performances,” she says. “We moved cameras around to get different perspectives – the second performance was best so that became the key show for the edit.”

More than 50 hours of camera tapes were then shipped to London and digitised at On Sight's HD LAB on to a LightWorks multicam system known as HeavyWorks – David Mallet’s favourite edit system – where the multicamera edit was carried out before the HD conform on a Sony Xpri. Shot at 1080i, to meet NBC’s HD deliverable requirements.

Two versions were produced – a 45-minute HDCam version for NBC which had to be delivered in standard definition and high definition, plus another 100-minute DVD master – guaranteed to be a best-seller this Christmas.