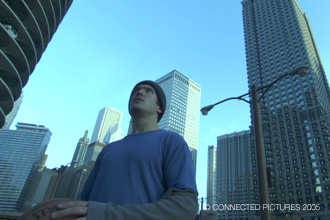 Cutting edge technology was instrumental in creating the right look for a film on the steel industry.

Given that the assignment involved making a short film about British Asian steel millionaire Lakshmi Mittal, the richest man in Britain, you might assume that Connected Pictures would have gone for film - the most expensive format. but producer Adam Penny had a different aim: "We wanted it to be made using cutting edge technology because Mittal is at the forefront of the steel industry."

The solution was to use an On Sight Panasonic Varicam camcorder, combined with a swing and shift lens to help provide the look that Penny was after. "We didn't really want the pinpoint documentary style optics that HD can give you, so this set-up was unbelievably good," he recalls.

On Sight hire manager Tony Maher adds: "We always point out that there are specific HD lenses designed for these cameras, but you can always add a special adaptor so that they work with standard 35mm kit."

Penny adds that On Sight's HD Hire support was also very useful. "I was on the phone every day to Tony at the start," says Penny. "And they gave us time with the camera to make sure we were comfortable with it."

Back-up was also available throughout the shoot, he adds. "Once the camera was mishandled on route from Kazakhstan to Chicago and the eyepiece was damaged, but On Sight sorted it out by replacing the viewfinder at Heathrow. it was absolutely buggered so it was great to have that support," says Penny.

The Varicam proved to be the ideal choice for the low light conditions inside Mittal's steelworks, he reveals. "They are very dark places - black really with just the bright fires from the steel furnaces, so there would be no way that you could shoot that on a format like Super 16."

Another advantage of HD, particularly on international shoots such as Mittal Steel (shot in Hungary, Kazakhstan, London and Chicago), is that it copes well with airports. "When the cameras were put through customs, everything was much simpler because everything can go straight through the X-ray machine, which would ruin film stock. We'll definitely be using it again."